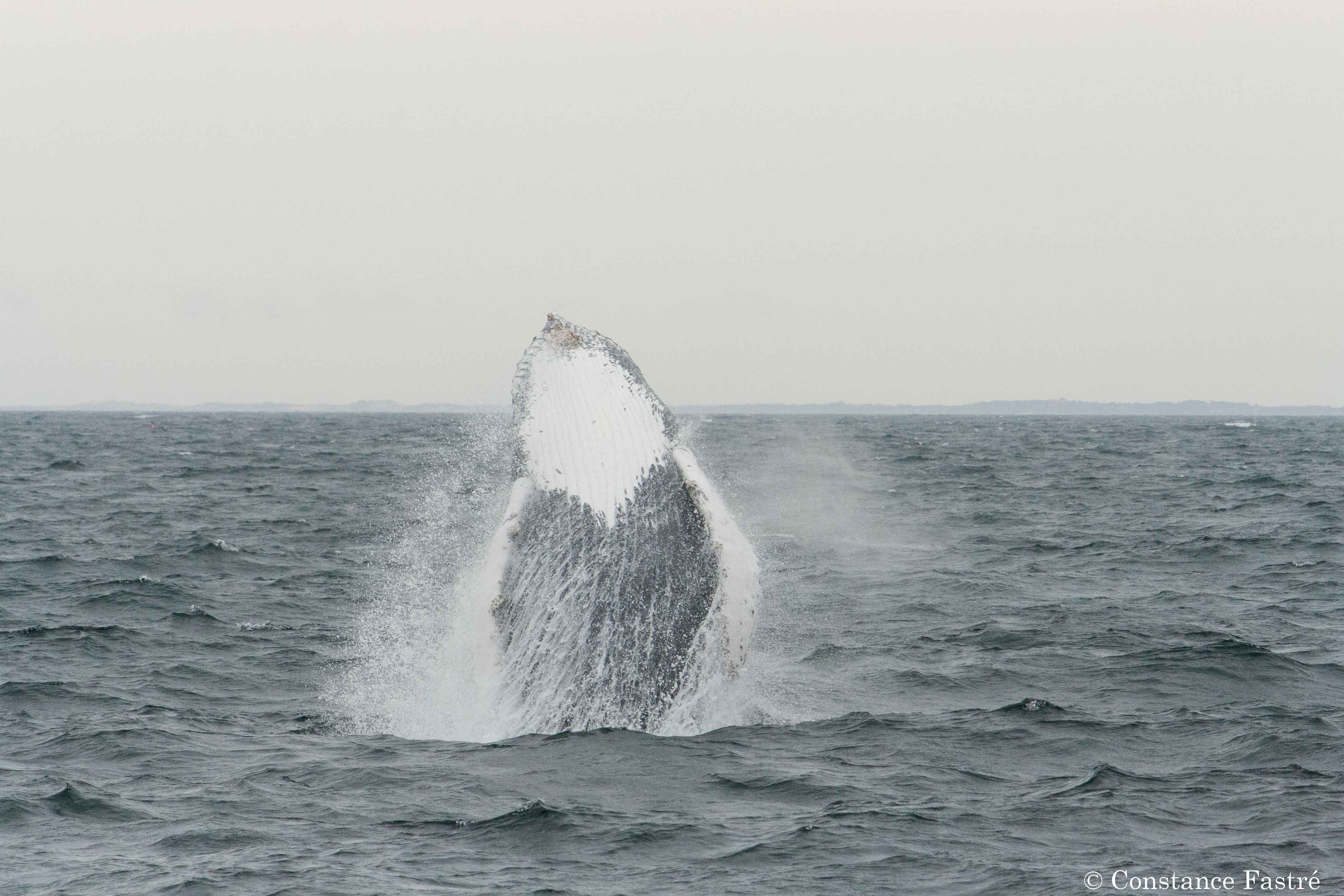 Although Acadia is the only national park in the whole of new England, it is far from the only place where you can find nature. State parks, seashores and even cities can offer equally exciting opportunities. Here are a few places we visited in the fall of 2017.

This marine protected area offshore of Massachussets was created in 1992 and is most well-known for the frequent presence of Humpback whales, Finback whales, Right whales and sometimes other endangered whale species. Whales visit the Stellwagen bank in the warmer months to feed on mackerel, herring or krill. As the bank is an underwater extension of cape Cod and runs up to cape Ann, it can be accessed from Gloucester, Boston and Provincetown. Gloucester is thought to be the best location to start your whale cruise as it is closest to the Sanctuary, however we found it more practical to start from Boston as we could then also visit the city. We set out on a cloudy Sunday morning desperately hoping to find a whale. Of course, if you don’t see any whales you get a free ticket for a future tour, but we were October 29th; the very end of the season (whale watch season runs from mid-April to end of October). Although the tour guide told us they had seen a whale the day before, weather conditions were far from optimal that day and the sea was rough. We set out troubled by the idea that it would be hard to see anything and fearing we might get seasick.

Our fear for seasickness soon proved to be needless, as even on the open water the large catamaran plowed effortlessly through the waves. On the way to the Stellwagen Marine Sanctuary we were already treated by Gannets, Greater shearwaters and Scoter ducks flying by, but the biggest treat was still to come. After an hour of sailing, not long after entering the sanctuary, we found a mother Humpback Whale (Megaptera novaeangliae) with her calf. After they had allowed us some shots of their dorsal fins and occasional blows, the couple decided to turn their performance up a notch. Just when everyone on the boat had overcome their first surprise of finding whales on a rough sea so late in the year, the calf breached in front of the boat, evoking a spontaneous chorus of ‘Aaah’ and ‘Wow’. The calf then took the lead and displayed the whole range of surfacing behaviors: breaching, spy-hopping and tail slapping. We followed the playing couple for an hour more and set course back to Boston, our minds filled with joy and our cameras with epic shots. 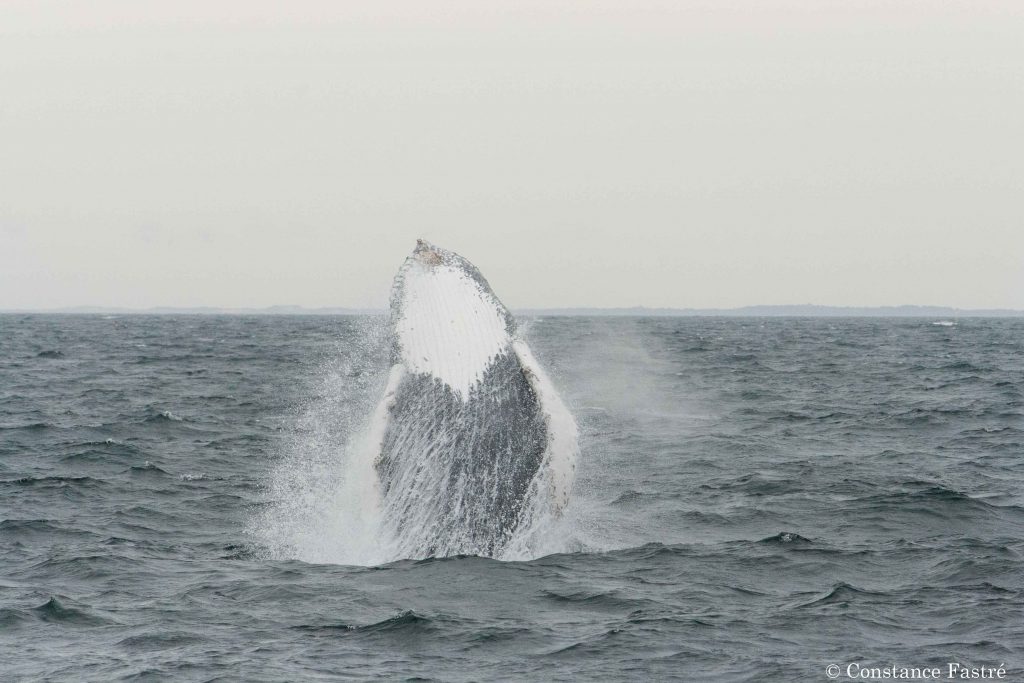 Although Stellwagen Bank is one of the best places for whale watching in the USA, you can take whale cruises throughout the whole coast of New England, from Maine to Rhode Island. Not surprisingly, whale hunting was once a major industry in New England. Find out more about the history of whaling at the Nantucket Historical Association Whaling Museum (Tip: check the opening hours in advance. We only learned they close a week a year when we got on the island… in the middle of that week) or visit the last American whaling boat at Mystic Seaport.

This protected area encompasses forty miles of pristine sandy beach, marshes, ponds, and supports diverse species. The national seashore is a major tourist attraction, so don’t expect to get a wilderness feeling. Unless you are a keen birder – spring and fall migrations often bring rarely seen species to the Outer Cape – you will probably visit Cape Cod to hike its pristine seashore and cultural landscapes. Anyone should however keep an eye open for the beautiful Red Cardinal (Cardinalis cardinalis) and the cute Eastern Chipmunk (Tamias striatus), both easy to spot in the area.

Monomoy National Wildlife Refuge was established to provide habitat for migratory birds, however it is apparently also a good place to spot sharks in the shallows. Make sure to stop by the Chatham fish pier to watch massive gray seals beg for scraps from the fishing boats. You can see them every morning when the fishing boats return with their catch (ask the locals about the exact time of the day). 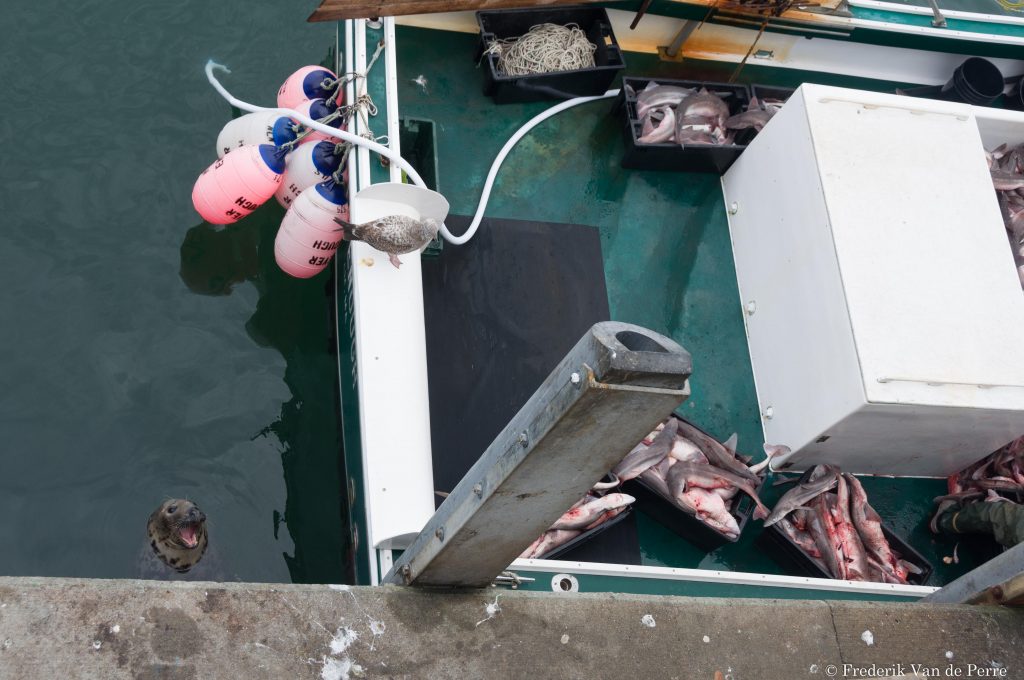 The White Mountains are a rugged mountain range covering about a quarter of the state of New Hampshire and a small portion of western Maine in the United States. They are part of the northern Appalachian Mountains and the most mountains in New England. Most of the area is public land, including the White Mountain National Forest and a number of state parks. Mount Washington, the highest peak in the Northeastern U.S., is part of a line of summits, the Presidential Range, that is named after U.S. presidents and other prominent Americans.

We did a road trip through the mountains following two highways crossing the area; the 16 and the Kancamagus Highway. The Kancamagus highway is a 34.5 miles scenic road from Conway to Lincoln. Along the road you can stop at several overlooks and historical places, or start a hike to one of the waterfalls. Stop by the Saco Ranger station to get a description of the points of interest along the highway. The landscape is at its best in fall: check out a foliage tracker to make sure you arrive in the peak foliage. 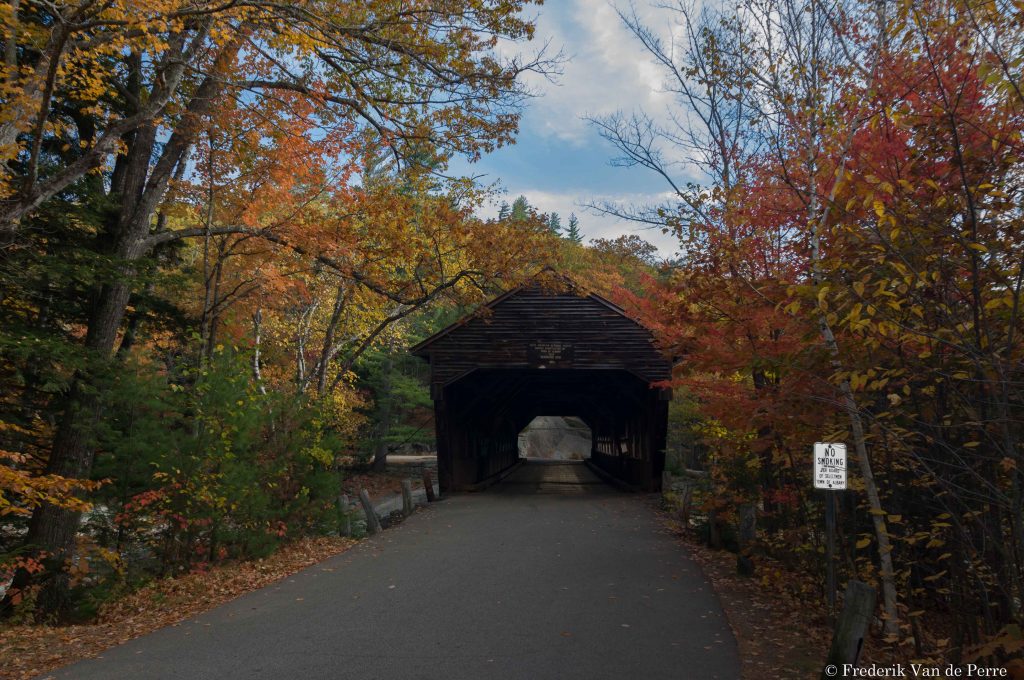 Apart from driving the scenic byway you can hike one of the countless trails or get up early to spot a Moose. There are special Moose tours – basically bus tours with a permission to use spotlights – but judging from the warning signs, you should be able to spot one yourself on the road at night.

Another mountain range worth visiting. The “Berkshires” includes all of the highland region in western Massachusetts, and (under the name “Litchfield Hills”) the northwestern corner of Connecticut. Geologically and physically, the Berkshires are the southern continuation of the Green Mountains of Vermont. We visited the area on three occasions; we first did a road trip following the Mohawk trail, we walked part of the Appalachian trail and visited the White Memorial Conservation Centre.

As part of our little road trip through Massachusetts, we followed Route 2, better known as The Mohawk Trail, between Williamstown and Greenfield. The route doesn’t only offer splendid views on the forested hills along the Hoosic river, it also passes by a number of interesting stops from which we picked a few. Our first stop was the Natural Bridge State Park, east to the City of North Adams. As its name says, the small park has an adventurous walk along its geological oddities. Also, don’t miss the little sign explaining the history of the ‘Meeting of the Waters’ on the way to the park from the parking. Next, we stopped at the Hairpin turn to get a sense of orientation: you can look all the way to Vermont in a panorama that includes Mt. Greylock, the Green Mountains and the Hoosac Valley. The trail continues to rise to the Whitcomb Summit, home of the Elk Memorial on the highest point of the Mohawk Trail at 2,200 feet. After, we stopped at the famous “Hail to the Sunrise” Statue, a memorial to the Mohawk Native Americans. Take a short detour to see the Bissell Covered Bridge just 600 feet off Route 2. Lastly, we stopped at Salmon Falls for its Glacial Potholes located below Salmon Falls and carved out of rock during the Ice Age. For all stops, download the official visitors’ guide to the Mohawk trail here. 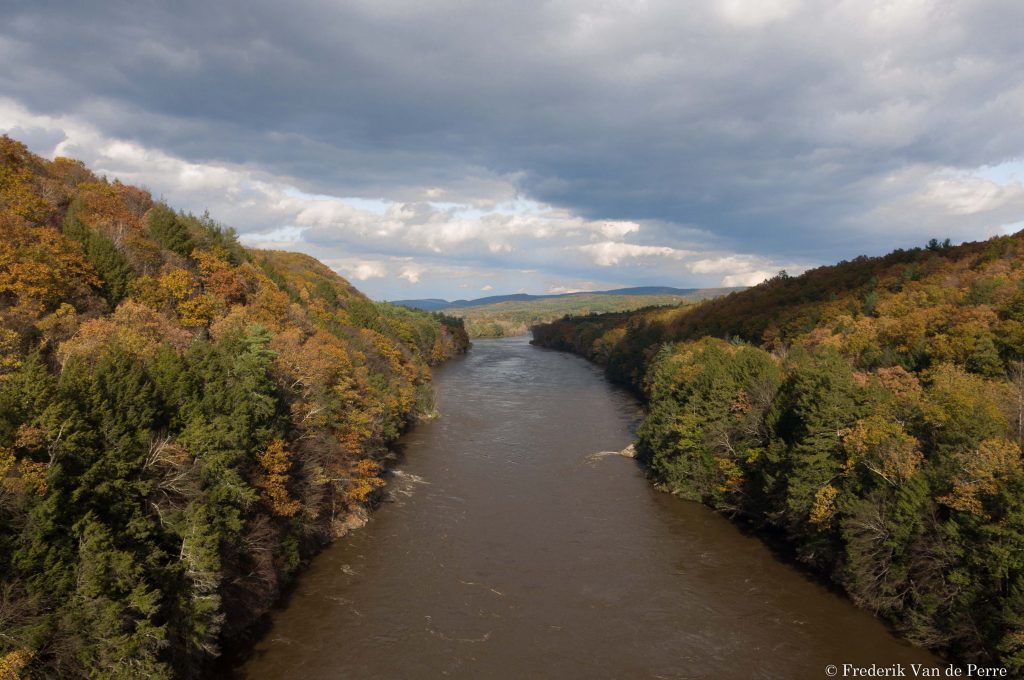 Later in the year, we spend a weekend at the Berkshires. On the first day, a short but feisty climb brought us to Lion’s Head and a superb view over the Berkshires. On Sunday, we took the Race Brook Falls trail up to the mountain ridge. This path climbs up the mountain for three hours passing by the waterfalls. When you reach the top follow the advice the locals gave us: ‘when you think you’ve reached the view, continue a bit more’. Indeed, when you walk all the way up to the ridge you get an even more spectacular view of the region. More importantly, you can tell people you officially walked part of the Appalachian trail! One tip when you want to do a short walk in the Berkshires, try to get a trail map in advance, the information signs at the start of each walk never give enough detail to plan your own route.

We drove to Litchfield on a drowsy day, hoping, against all knowledge, the weather would be better on the other side of Connecticut. But it didn’t stop raining, so we decided to visit the White Memorial Conservation Center. This small museum has a nice collection of dioramas showing New England’s wildlife in its natural surroundings. From the museum there are several hikes going towards one of the lakes. Because it was still raining we decided to do the Little Pond Boardwalk Trail, and not to take our cameras… a decision we will not likely make again. Halfway the pond we heard a big splash from behind the reed. A bit further the reed opened up and we found a small creek with a fallen tree. Just when we thought the Little Pond monster would not reveal itself, a Beaver casually emerged from the water 10 meters from us! Not bothered by its Belgian audience, the Beaver continued preparing for winter: chopping up branches and dragging them underwater. He even came ashore walking, dinosaur-like, on his hind legs. We watched him for a couple of minutes and continued our walk with the beaver imprinted in our memories (and fortunately, on our cellphone cameras).