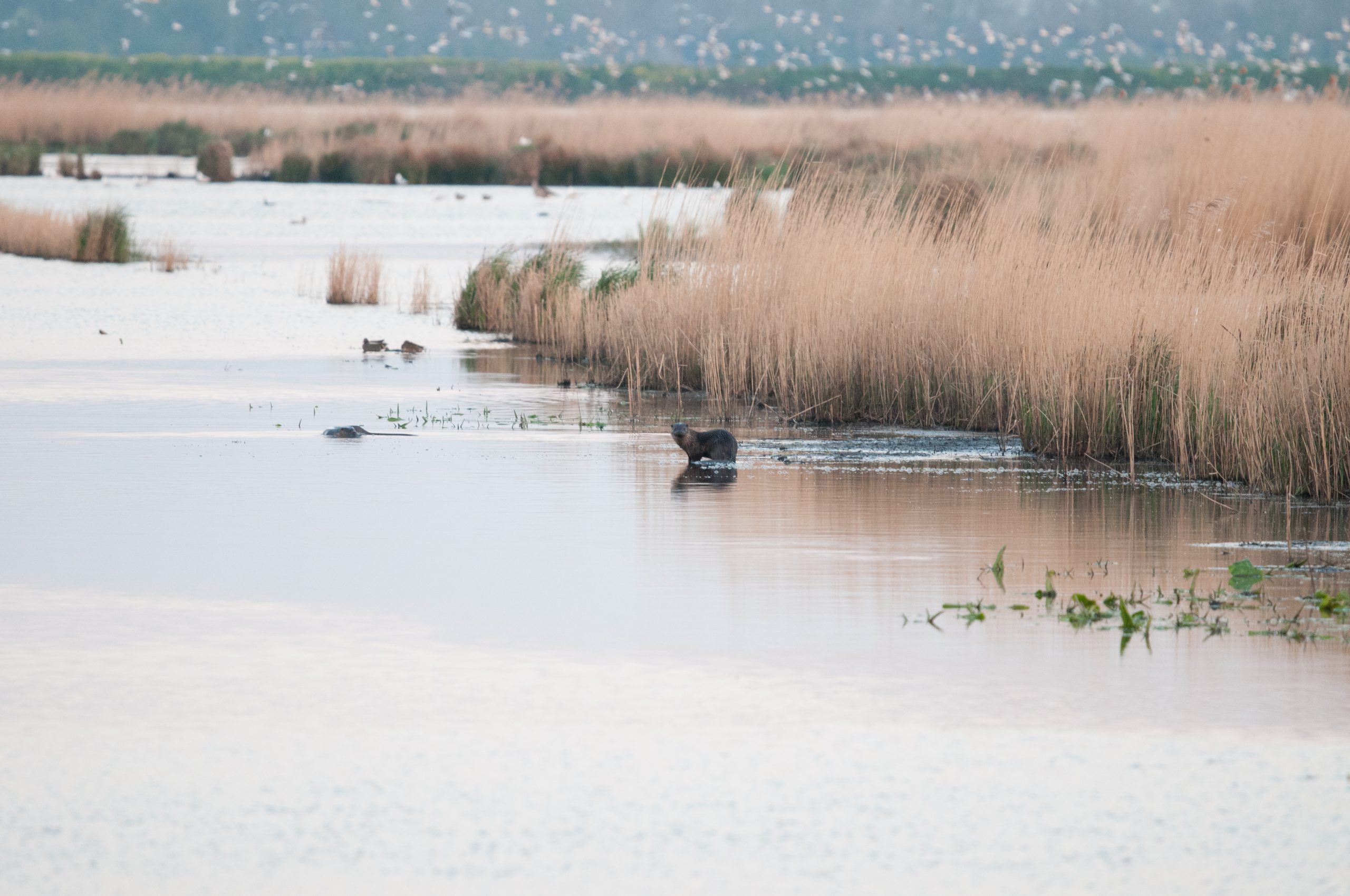 Otters are wonderful animals. With their streamlined body, webbed feet and water-repellent glossy fur, they are one of the best swimmers of all land mammals. We have long wanted to see an otter in the wild, but this is no easy matter in Europe nowadays. Due to their talent to catch fish, on which they feed, the European Otter (Lutra lutra) was long considered a pest by fishermen and was therefore methodically eradicated from most of Central Europe over the last centuries. Even where otters escaped human persecution, they were decimated by water pollution, the disappearance of natural riverbanks and the drainage of most European wetlands.

A few decades ago, finding a wild European Otter in The Netherlands, Belgium or even the British Isles would have thus been impossible, but this is thankfully slowly changing! Taking advantage of their new status as protected species and of the increasing water quality in many waterways, otters are steadily recolonizing areas they used to inhabit. However, made shy and secretive because of persecution and almost exclusively nocturnal, it remains difficult to know where they occur and to observe them in their natural environment.

Last year, eager to improve our wildlife-watching skills, we took part in an ‘otter-tracking weekend’ organized by the mammal study group of the Belgian nature NGO Natuurpunt. The objective of the trip is to teach Belgian naturalists how to find signs of the presence of otters, using their tracks. In the future, it is hoped that these trained volunteers will take part in the new official monitoring scheme to detect otters when they come back to the rivers, wetlands, coastal areas and marshlands of Belgium, and especially in the highly urbanized region of Flanders, which is probably happening as I write this post!

To get hands-on experience, we headed towards the Weerriben-Wieden National Park in The Netherlands, the largest protected fen in North-West Europe and home to one of the densest otter populations in the country. Covered by lakes, ponds, canals, peatlands and forests, the area can be discovered on foot, by bike, canoe or with electric boats. We especially recommend the latter at dawn, when you can admire the sunrise and spot many birds, like the beautiful Bluethroat (Luscinia svecica) or Reed Warbler (Acrocephalus scirpaceus)!

How to find otters

Under the close supervision of one of the best wildlife trackers in the Netherlands, René Nauta, we were quickly taught the tricks and tips of how to find otter tracks in the wild. It soon turned out that the first step when trying to find out if otters are present in an area is to look for… their poop. This may not sound very exciting or appealing, but otters have a very interesting behavior when it comes to marking their territories: they display their sweet-smelling poop, called spraints, in carefully selected spots. Spraints, often laid on top of rocks or under bridges, act as signals to warn off other otters that the area is already occupied.

When spraints are laid in sand or mud, there are often paw prints found around, so it is important to be able to identify these prints. Roughly 7.5 cm long in total, the prints appear rounded and display four toes (the fifth, most external toe, often does not appear on the print).

Camera traps are extremely useful to make sure otters are still using the area where spraints are found without disturbing them. They also have the advantage of being able to record all night, when otters are most active. Our group therefore set up a few camera traps in various places where we had discovered spraints, and after one night only, we had filmed otters passing by in two of these locations!

To see an otter with your own eyes however, the key is to pick a location where fresh spraints were found and head there right before dusk (or dawn). With a lot of patience and luck, otters may be passing by before it gets too dark (or light). Because otters have a very large territory and move constantly, covering large distances every night, you are unlikely to be able to observe them for a very long time at the same spot, but who knows? A useful tip: dress in neutral colored, noiseless clothes (avoid ruffling fabrics), sit down, stop moving, open your eyes and enjoy this marvelous time when wildlife awakes. Roe deer, polecats, martens were all out and about and some of us were ever so lucky to spot some of them.

But the 20th April 2019 was our lucky day. We had chosen the right spot, for only minutes after we arrived at the lake we had selected, not one but two otters emerged from the reed! Even more lucky for us, they stayed long enough, and we watched them fishing and playing together, walking on land and then swimming some more. It was a magical moment for us: our very first otters in the wild! With a beautiful sunset, a couple of merry otters and the birds singing in the golden evening, we felt, once again, fully happy and in harmony with nature.

If you are interested to learn more about tracking techniques, check out René’s webpage (in Dutch, https://hetprentenboek.eu/ ) or head towards the website of the wildlife trust in the UK for an English introduction ( https://www.wildlifetrusts.org/how-identify/identify-tracks ).