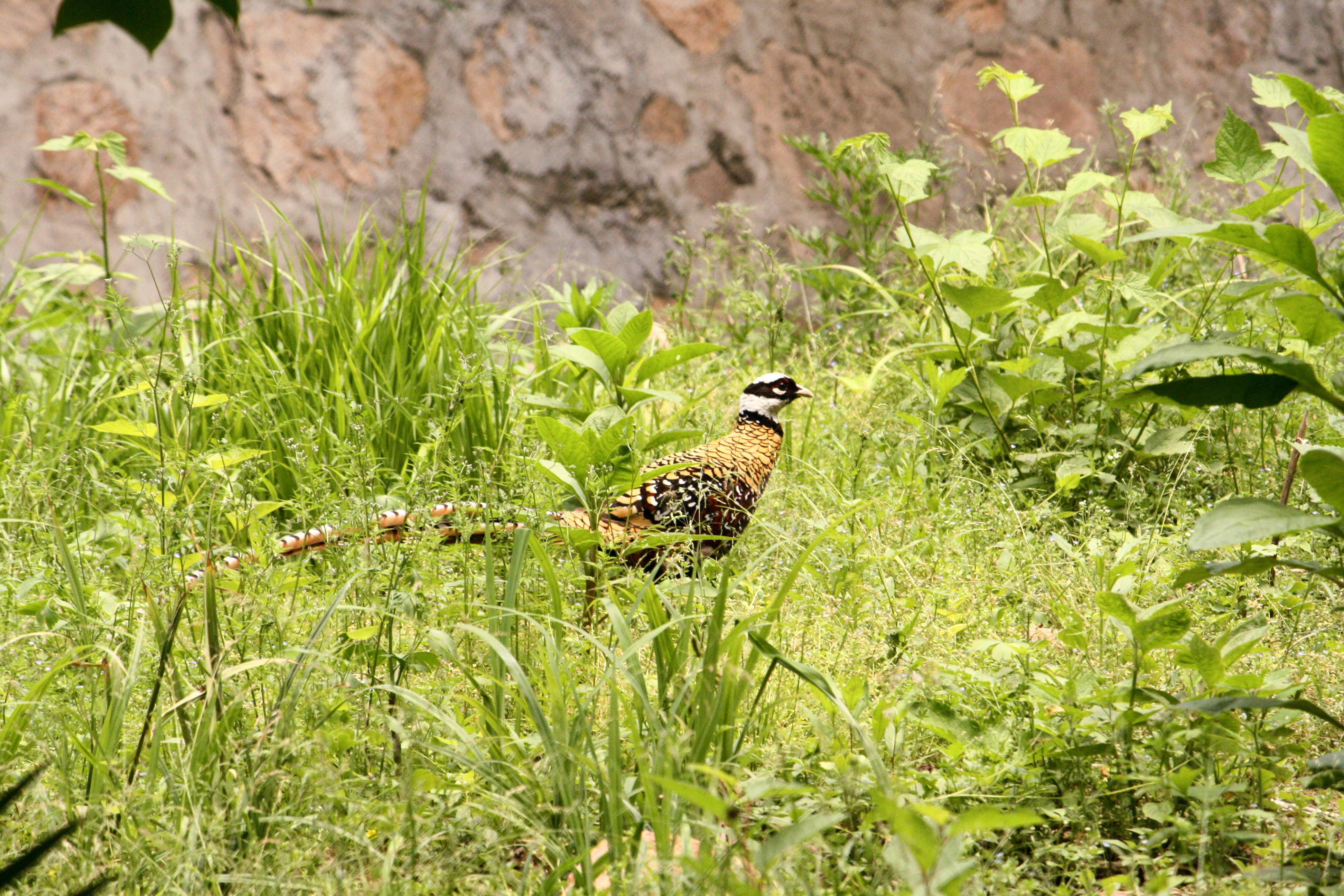 As I was freshly out of university in 2013, unemployed and without a dime, I decided to apply for positions as a field assistant. This was supposed to serve my career but most importantly allow me to discover natural areas rather cheaply – in exchange for my hard work. For many young (and unfortunately also older) conservationists, volunteering is often the only way to get to do and gain experience in what we like so much, fieldwork. I had two main search criteria: the position must be located anywhere warm and further than, say, 5000 km from my Belgian home. That is how I found myself packing up a few weeks later. I was to spend the next three months (from May to August) in a field station in the Henan province in China to study the nest dismantling behaviour of a bird species I had never heard about before: the Hair-Crested Drongo (Dicrurus hottentotus). 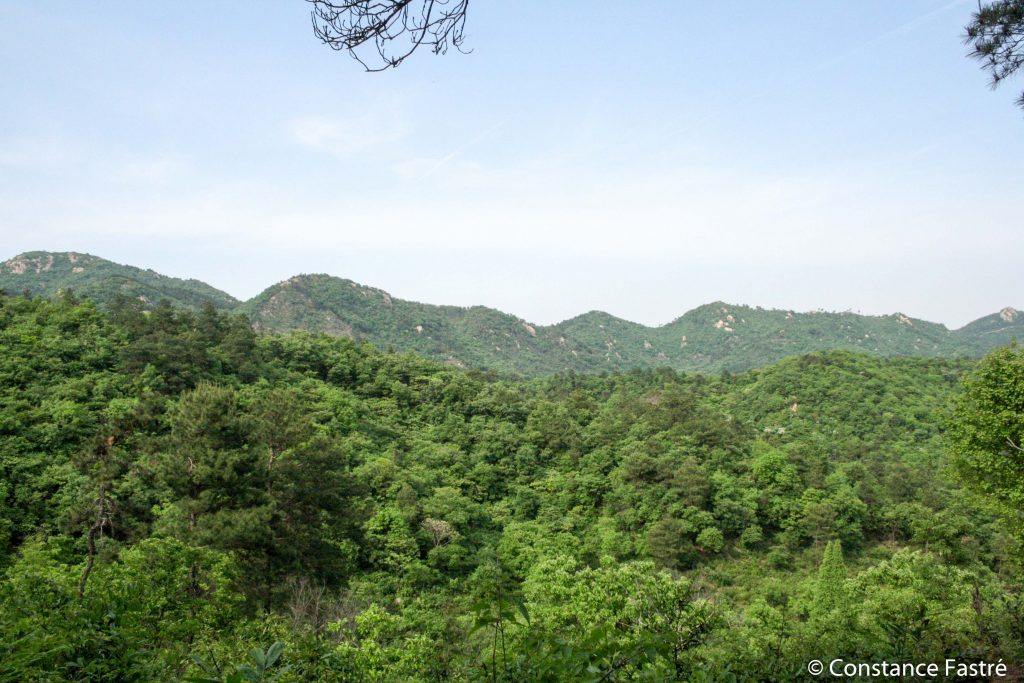 The station is located in the Dongzhai National Nature Reserve and is in fact a ‘famous’ birding location, the home of the endemic and magnificent Reeves’s Pheasant (Syrmaticus reevesii). Few foreign tourists however visit the area due to its remoteness and the trip to the station from Beijing can be tiresome. For me, it included a 12-hour train ride and an extra bit with a car. Visiting the area with organized birding tour operators or guides is certainly the best option. If you ever plan to visit the area, be aware that the weather can be extremely hot (and humid) and it is advisable to avoid weekends or holidays which bring an impressive amount of local tourists in the area.

I had never been in Asia before and these three months in the heart of a subtropical forest was one of the most enriching experience in my entire life. I had just begun birdwatching a few months before, and every new bird species was new and delightfully exotic to me. As my job consisted mainly in being outside monitoring the birds in their nests, I spent countless hours walking around or sitting somewhere in the beautiful forest, watching birds. It was almost like holidays for me. 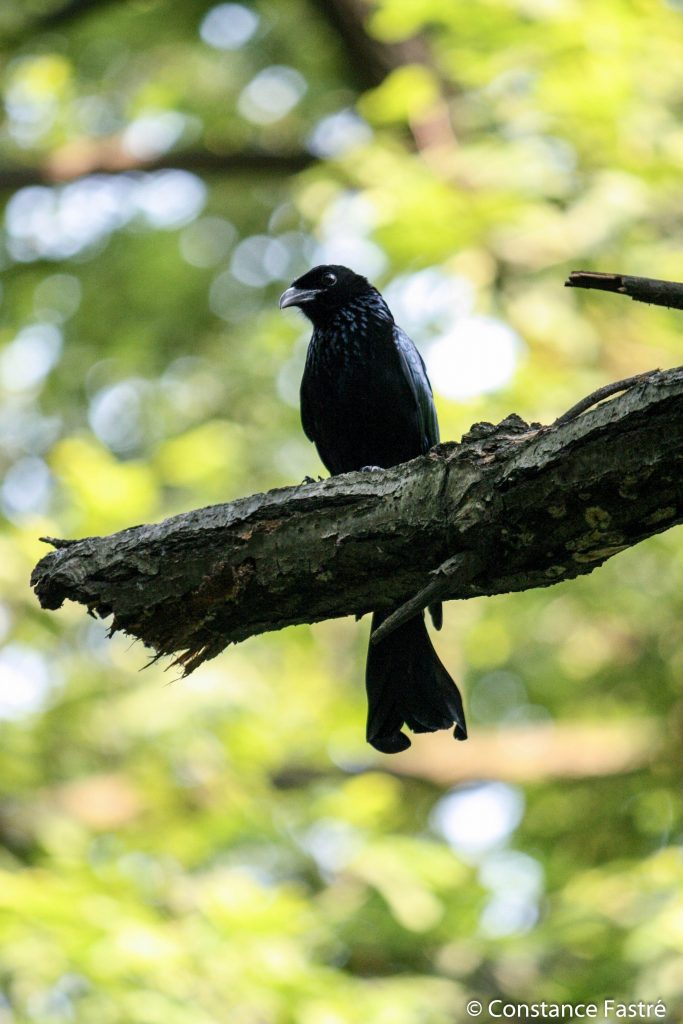 The Hair-Crested Drongo (Dicrurus hottentotus) is a beautiful bird and a very interesting study species. They are uniformly jet-black with metallic-blue reflections but exhibit two particular features: curved feathers on the tail and specialized feathers on the head which look like hair and from which they owe their names. Our project aimed at understanding why many of the birds spend days destroying their own nests after the chicks have fledged. The main hypothesis is that pairs that successfully raise chicks in one location do not want their nests to be found and stolen by other birds the following year. In short, they want to keep their nice spots to themselves. Rather clever birds they are.

But the bird everyone wants to see in Donghzai is the Reeves’s Pheasant (Syrmaticus reevesii). Because of forest loss and fragmentation, their wild populations are declining and only 23,000 birds are estimated to remain in Chinese forests. With an estimated local population of a thousand birds, the Dongzhai National Nature Reserve is indeed the place-to-be if you want to see them. The golden, white and black males with their very long barred tails are truly stunning birds. And the great thing is that they are actually quite easy to see in Dongzhai if you know where and when to look! I myself saw them at least a couple of times every week, usually around the research station but invariably early in the morning. Small tip: there is a small rehabilitation centre for wounded animals at the entrance of the forest. At the time of my stay, there were a few female pheasants inside the enclosures, which attracted quite a few males from the neighbourhood. Sometimes there would even be three of them together! It is however very challenging to get good pictures of the pheasants, as they will run away as soon as they hear you. 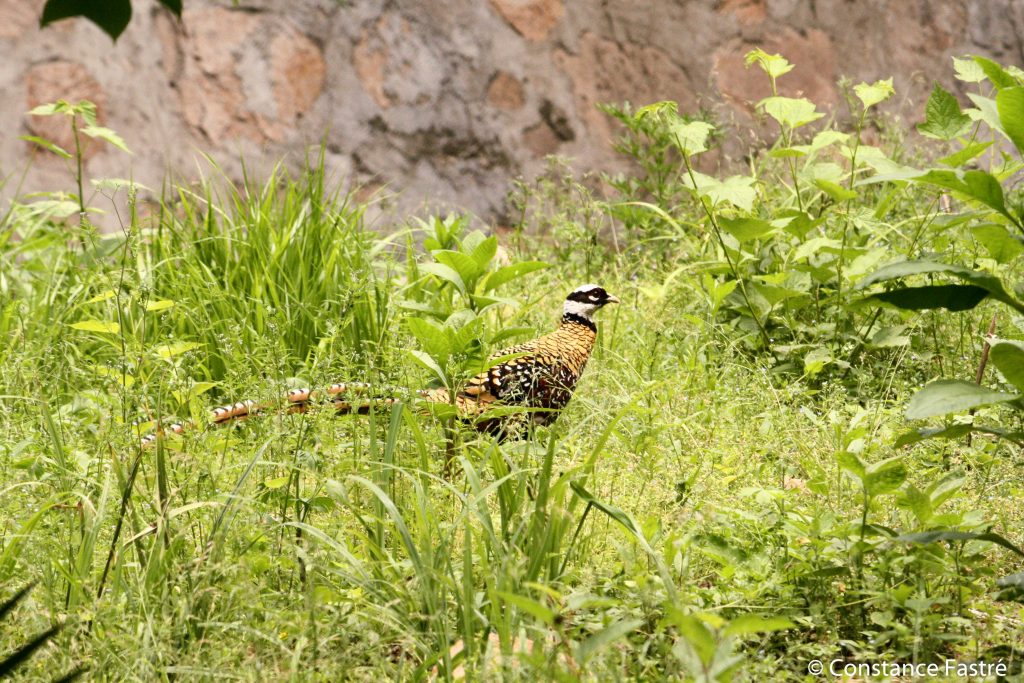 The reserve holds a good number of other species but my personal favourite is the Fairy Pitta (Pitta nympha), a spectacular (and rather singular)-looking bird. Victim of deforestation and cage-bird trade, its population is sadly decreasing in the whole of Asia. For weeks, the only impression I got from a Fairy Pitta was a dazzling brief flash of metallic light blue and shiny red passing through the trees. We were however aware that a breeding pair had been located and that a dozen photographers had set up camp nearby the nest. This was bad news, as the species suffers from the disturbance caused by photographers on their breeding grounds all over their range. Luckily, it appeared that the pair successfully raised two chicks despite their public. We waited until we deemed safe to go have a look by ourselves at the little family. Fairy pitta chicks are fascinating: they leave the nest before they can fly and run around while the parents fetch them food. When we arrived, we could see one of the chicks wandering outside the nest, waiting to for a tasty meal (a huge cicada or other insect) to be brought by their attentive parents. The birds flew rather close from us and the chicks were adorable. It was wonderful to see them at last, and so well too.

There were many other birds to see in Dongzhai. Hundreds of kingfishers (Common, Black-Capped and Crested Kingfisher), were perched on electric lines and around the numerous rice paddies and streams. My sightings include Oriental Scops-Owl, Blue-Throated Bee-Eater, Hwamei, Chestnut-Winged Cuckoo, Oriental Cuckoo, Orange-Headed Thrush, Japanese White-Eye, Mandarin Duck, White-Rumped Munia and many other delightful Asian species. The complete list can be found here.

But there are not only birds inside the Reserve: I had a few rare and brief sightings of wild boars, deer, hares and even a badger. The amateur herpetologist will be fascinated by the many snakes (although I only saw one) and the enthusiastic entomologist will be thrilled by the remarkable diversity of insects, bugs and especially the amazing butterflies.

There are many different parts in these forests, each more enchanting than the last

Many parts of the Reserve are cultivated (both for tea and rice). The area is also a touristic hotspot during the holidays