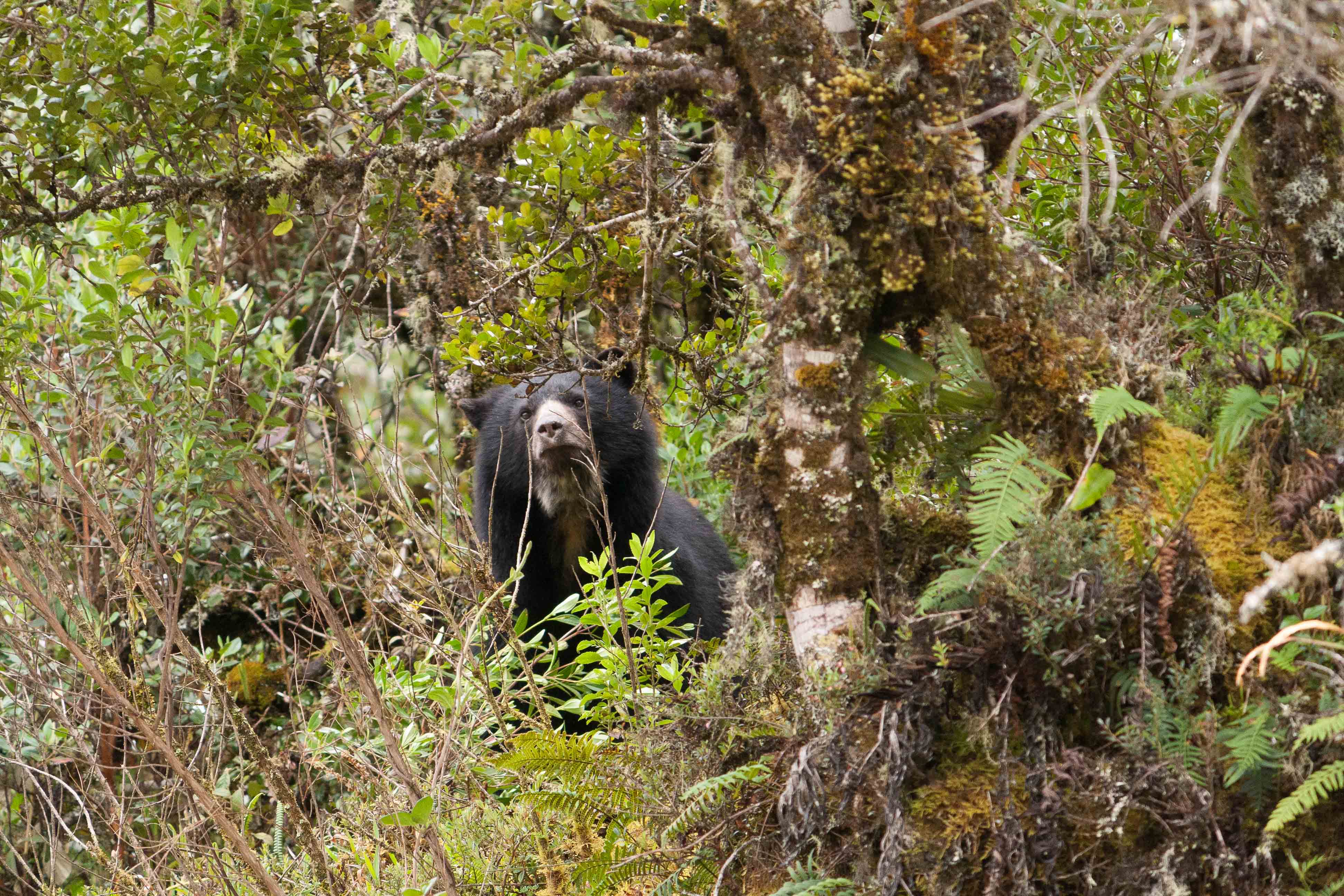 Where and how to see an Andean Bear in Colombia

Chingaza National Park is located in the Eastern Andes of Colombia in the Orinoco region, only a few hours’ drive from the capital of Bogota. It was created in 1977 to protect its typical fauna and flora as well as the ecosystem services it provides. Its main ecosystem is Paramo, a high-altitude vegetation association characterized by high moisture and low temperatures: the park acts like an enormous sponge which provides water to the city of Bogota. Chingaza NP ranges from 800 to 4200 meters of altitude, which means hiking can become quite challenging in the higher, oxygen-poor parts, especially when going up.

Practically , the access is strictly controlled and a request must be filled at least 15 days before the visit. Additionally, all visitors must register at the entrance (visit their website for details). There is one shelter and a campsite inside the park where meals can be ordered, but you must be prepared for the cold temperatures, especially at night when they can drop below zero (even inside the shelter). It is best to visit Chingaza during the dry and warmer season (December to March) but it is open all year-round.

We visited the park with a local tourist agency called Andes Ecotours in August 2017 for three days. It was cold, often rainy with sunny bits but we could spend most of the day searching for our target species: the Spectacled or Andean Bear (Tremarctos ornatus), which, as its names suggests, can only be found in the Andes of South America. Chingaza NP is one of the best places  to see these bears as it is home to one of the densest populations (more than 40 bears in 76 600 ha). Sightings are however rare as the animals avoid settlements and most encounters are rather fortuitous, often happening on isolated hiking trails. Spectacled bears are diurnal and omnivorous but have a predilection for puya, a plant form the Bromeliaceae family. They tear off the leaves to eat the white core. Finding puya leaves lying on the ground, especially when accompanied by a fresh feces, is a good indication of the presence of the bears, so keep an eye out.

To spot the bears, which usually roam around during the day in search of food, driving around and stopping regularly to scan the surroundings is the best strategy. This also allows you to take in the stunning landscape of the area. Talking to rangers (in Spanish) can also be very helpful as they have extensive knowledge about the habits of bears and can let you know if they see one. Traveling with a guide as we did is also an asset as they are more likely to be warned by rangers directly, as happened to us on the second day. We were quietly having lunch when one of the rangers dropped in to salute our guide and casually asked if we had seen the bear which was walking on the shore of the lake in front of the building 10 minutes ago. Before he had finished his sentence we were all sitting in the car, frantically yelling to the driver to get to the best viewpoint. There it was: a bear-shaped black spot (because it was one), walking to take cover. It was very far, and it was just a glimpse really, but many people do not get that chance. 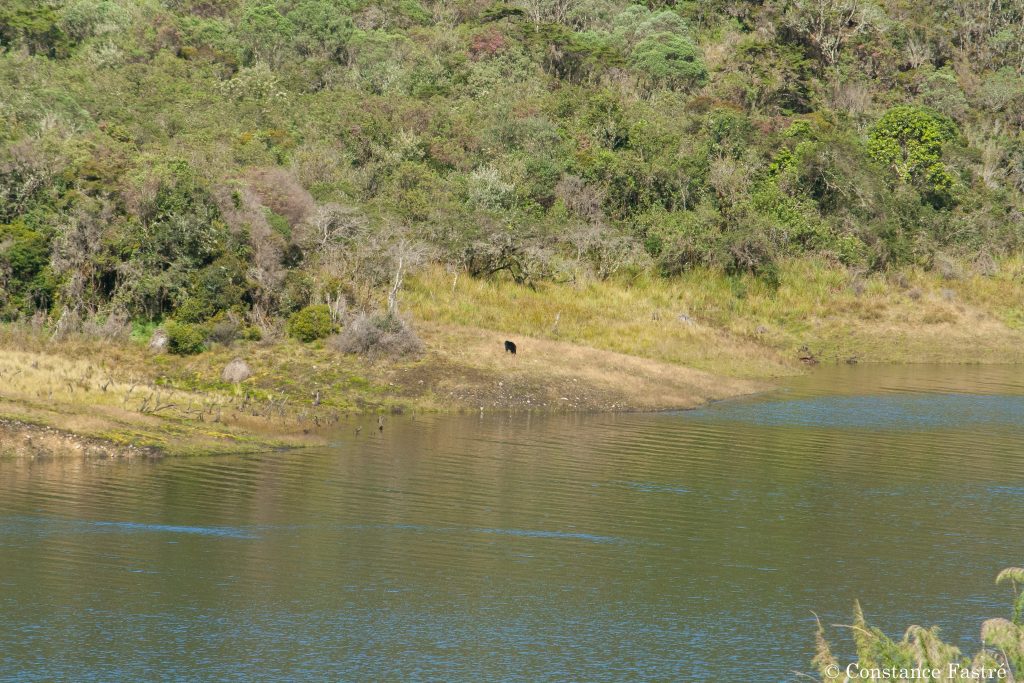 This is how all the pressure of seeing a bear went away and we happily spent our last afternoon and morning in Chingaza NP, birding, looking at plants and walking around this beautiful place. The hope of seeing a bear from closer did not leave us completely, but as we were driving from the shelter towards our next destination, outside the park, I decided I was happy. This is when we saw a man standing on the side of the road and taking pictures with his cellphone. It took us some time to realize he was taking pictures of a bear, standing on top of the road, half-concealed by the forest. We could not have been closer and we were thrilled to be in such proximity of this beautiful animal. After a few seconds of excitement and disbelief, the bear left and disappeared among the trees. We could see it feeding for a few minutes before we lost sight of it forever. It was awesome.

Besides bears, the park hosts a score of rather relaxed (great shots guaranteed) Goudot’s White-Tailed Deers, an Andean deer subspecies. We also spotted some forest rabbits at night. Birding is rewarding for skilled birders, with numerous Andean specialists such as hummingbirds, saltators, cotingas, thistletails, treerunners, woodpeckers, etc… A complete list of the species we observed can be found here. For those who are keen on seeing hummingbirds from close and take great pictures, it is possible to stop on the route between Bogota and Chingaza, at the Hummingbird Observatory (be sure to check our post!).

Hiking trails are beautiful and the views are awe-inspiring. The vegetation is unique, and we marveled at the multitude of flowers and colors we discovered along the way, both in the cloud forests with their gnarly trees covered in vines and mosses and beautiful orchids as well as in the treeless high-altitude grasslands. Most plants are endemic and highly specialized species. There are multiple lakes fed by wild rivers nested between the mountains which provide some of the most scenic and enchanting views we had ever seen. At the time of our visit, there was almost nobody, no infrastructure to be seen anywhere, no noise else than this from nature. Despite the cold and the occasional rains, we were in paradise.

Enchanting forests and flowers amidst wild mountain lakes and rivers

Alone on top of the world